Photo of Irving at Dubrow's 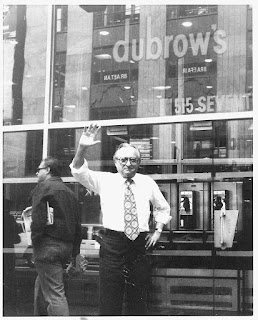 According to my aunt Beth, this photo was taken on the day the Manhattan Dubrow's closed, sometime in the 1980's. I remember when it closed - but I can't remember exactly when it happened.

Isn't this a great photo? My grandfather looks happy - but sad, too. He was a very emotional man. My mom has often joked that she, my cousin David, and my grandfather could rent themselves out as the Lachrymose Trio - crying at every occasion. Ultimately, I think he was happy to close Dubrow's, happy to retire - despite what it meant about the changing face of New York City.
Posted by Eve at 4:28 PM 4 comments:

Happy Passover to everyone!

I just came back from Miami and so I've got some renewed energy for this project. My aunt Beth, Irving Kaplan's oldest daughter, told me a funny story about working at the Manhattan Dubrow's one summer. It was about 1958, and she was 18 or so, and her younger sister, Bonnie (my mother) had already worked at Dubrow's. So when Irving put her in charge of answering phones, and asked her "do you know all the prices?" Beth said "of course!" - not wanting to appear less competant than her younger sister. But in reality she didn't have the faintest clue what the prices were. So she just made them up.

In re-telling this story, Beth said: "I didn't know there would be so many people calling...I thought maybe two or three people..."

At the end of the day, Irving, who was a meticulous businessman, counted out for the day. He was not pleased. Beth said she can still hear him saying to her in that tone that meant trouble: "Beeeeeeeeth..." (The inflection is hard to capture in writing.)

Beth said she went home that night and learned all the prices. But she only worked there one summer. "They couldn't handle having me there any longer!"
Posted by Eve at 6:49 PM 2 comments: