Letter from Sammy in Brooklyn

I received an email from Sam Chodosh who writes:

"I remember thinking I was all grown up when they gave me my own little card.

Before that, I just got stuff on my parent’s card.

I loved the water fountain. Even if I wasn’t thirsty, I’d get 4 or 5 glasses of water.

My friends and I used to go late at night and joke about “where is the next generation of derelicts hanging out at Dubrow’s coming from?”

Then my cousin walked in with his friends. I was really sad when it closed. My mom took me to see JFK talk, it was really exciting. I was 8, didn’t understand, but it was exciting.

It was a really fun fun place to eat. Sam (Sammy in Brooklyn)"

Thanks for sharing, Sammy! I love hearing from people who remember Dubrow's.
Posted by Eve at 10:41 AM No comments: 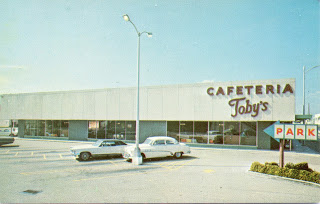 Phillip Pessar on Flickr uploaded this picture and writes: "Anyone remember Toby's Cafeteria? They were a childhood favorite. I always chose turkey and stuffing or fried shrimp and always a side of macaroni and cheese. There were 3 locations. 2695 SW 8 St, 99 SW 12 Ave, and 674 NW 54 St."
Posted by Eve at 10:59 PM No comments:

Letter from a reader

Received an email from a reader this week:

"Hello, Eve -
My name is Susan Pernick, and in some fashion I think we're cousins.  My grandmother Annie and Raizal Dubrow were sisters.  (Their maiden name was Soloveichik, which became Solowey.)  Lila, Minnie, George, Irwin and  Ruthie were my mother's first cousins.  We lived on East 18th between O and P, so the store on Kings Highway was only a couple of blocks away.


I only heard Benjamin called Barney. NeeNee (I've never known how to spell it) and I were friends.  Of course, I knew Sheila and Paul, but they were older.

Although I was very young, I remember hearing that George had been killed in a car crash in Florida.  I remember that my parents were very upset at the news.


My father, Max Goldenkranz, was the family's doctor.  He took care of Max and Minnie and their kids. He also became the doctor for a number of the employees at Dubrow's.


Max got my parents, my brother and me into the store to see JFK.  Although I was only 10, it's one of my strongest memories of my youth.


Ruthie dated a man named Seymour Gruber, who was a psychiatrist.  Before they were married, Barney and Raizal invited Seymour's (Sy's) family over to dinner.  Barney started to tell a story about Galicia, in Poland, and made clear that the people there were useless.  Sy's father started to protest that he was from Galicia when Barney, without breaking stride, said that there was one small shtetl there where the people were wonderful, and he asked what part of Galicia Mr. Gruber was from.  Mr. Gruber mentioned the name, and Barney said, "That's it!  That's the place!"  Ruthie and Sy had a long and wonderful marriage."

I love hearing from long lost relatives via the blog!   Keep it coming.
Posted by Eve at 9:26 PM 1 comment:

Benjamin Kaplan came here from one small village outside of Minsk. So did Rebecca Friendland.  They met each other and had three kids, one of whom was Irving Kaplan, my grandfather, who went on to manage the Manhattan and Miami Dubrow's for many years, along with his sons-in-laws.  Benjamin Kaplan came from a poor village in pre-World War I Russia and his son went on to college, graduate school, and became a successful business owner.

Benjamin Dubrow came with his wife Rose, and three oldest children, from another small, poor village outside of Minsk.  My grandmother Sylvia was in utero, so I guess she was what anti-immigration politicians today would call an "anchor baby."  His youngest daughter was the first person in his family born here.  He went on to be the founder of the chain of cafeterias so many people still mourn and recall fondly today.

This is what our current leadership refers to when they refer to "chain migration".  It's just a way of demonizing the American dream as my family and thousands of others have lived it.

From what I knew about his politics, my grandfather would be shouting from his grave at the current state of this country, which was so good to him, a proud second generation immigrant from a "shithole country."
Posted by Eve at 9:10 AM 4 comments:

Dubrow's in Miami has been a little neglected by this blog.  A Google search today reveals some more information - such as this great article in the Miami Herald which describes Miami in the 1950's as a leader in the South in desegregation, and the part Dubrow's Cafeteria played in making it a comfortable home for Jewish families as well.

And FYI, I have heard much about Rabbi Kronish over the years. He was the rabbi my family grew up talking about for many many decades.

"I really had never seen anything like Miami Beach. It was mostly desegregated for Jews by 1947, except for Bal Harbour. That unforgettable smell of fresh tobacco in the air was gone. Once our family checked into the rooms we reserved at The Georgian Hotel on Lincoln Road and Collins Avenue, I took one look out of the window at the ocean and knew that one day I would make the Miami Beach area my home.


The Georgian was at the heart of everything we did for fun that summer. It was a short distance to some of the Beach’s legendary eateries: the Crossroads, DuBrow’s Cafeteria, Huey’s Cathay House, Wolfie’s, Joe Hart’s Pickin’ Chicken and the Noshery at the Saxony Hotel. Between the hotel pool, the beach, miniature golf next door, and breakfast at the Liggett’s Drug Store counter, what’s not to like for a 9-year-old? I can still taste the fried chicken from Joe Hart’s and the corned beef sandwiches from DuBrow’s, sliced thin and piled high for a dollar."
Posted by Eve at 12:59 PM No comments: 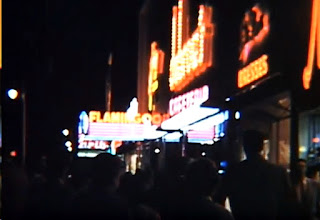 Jeff sends a link for a 1952 home video of Miami Beach. It is uploaded to Youtube by a user who goes by the moniker ReelNostalgia.  The photo above is a screen shot from the video, which is why it's so blurry.

Amazing to see how things change. When I was growing up and visiting Miami Beach and Lincoln Road, the area was deserted of nightlife and shops. Now it's hip and bustling - as it was back in 1952, when this video was shot. Things come full circle.

(Re-posting this entry with new links)
Posted by Eve at 12:51 PM No comments:

IKEA is bringing back the cafeteria

I missed this article last fall. The author suggests that IKEA is bringing back cafeterias - both in terms of the food, the style of dining, and the sense of community they create. They even namedrop Dubrow's:

"Cafeterias as public restaurants found hungry customers everywhere they opened for business. While chains like Luby’s, Morrison’s, and Dubrow’s would turn most of America into cafeteria country by mid-century, Los Angeles was the first cafeteria capital. Inspired by the Chicago girls’ clubs, a restaurateur named Helen S. Mosher opened the first one on the West Coast in 1905, on Hill Street in Los Angeles. She called it the Cafeteria, and women weren’t just the clientele: They were working in the kitchens, too. Soon after opening, the Pacific Coast Record reported that the Cafeteria made bank as “women cooks and see-and-select one’s food drew the crowds.” Mosher opened two more and soon had a slew of others, also run by women, to compete with in the days when L.A. ranked in size between Omaha and Memphis.

To women, the spaces were sold as an opportunity to skip the patriarchally enforced obligation to cook at home. The option didn’t exactly break the chains of domestic servitude, but pointed toward a new intersection between eating, money, and gender. “We want to say to every housewife in Phoenix,” read a 1914 ad in the Arizona Republican, “that the time has come when you can come to the New Palace Cafeteria and get the very best meal cheaper than you can prepare it at home.”

Cafeterias became places where just about anyone could get a meal, from bohemians to business executives, in a model that operated on the assumption of equality — with the exception of places like the segregated South."
Posted by Eve at 4:27 PM No comments: