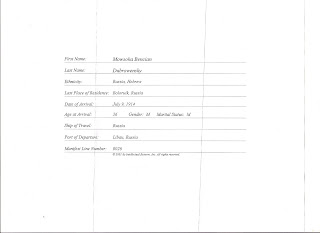 Man, it has been a long time since I posted anything around here. I'm sorry about that. I've still got stuff to share just sitting on my hard drive.

Today, my mother sent me something she retrieved for me when she visited Ellis Island months ago.  It's the print out of information about Benjamin Dubrow upon his first arrival to this country.  It lists his full, Russian transliterated name as being Mowsoha Bencian Dubrowensky.  He was 36 when he came here on July 9, 1914, already married.  His last place of residence was Bolruik, Russia and his port of departure was Libau, Russia. I'm guessing "Bolruik" is related to "Belarus" which is the name of the country which didn't exist in 1914, but is the region of Russia from which Benjamin and his family came.

This is where it all began. He didn't want to come, but he came, and he stayed. And he wound up opening a successful chain of cafeterias for several decades.  It really is the American dream.
Posted by Eve at 5:42 PM